Ben has incorporated much of the unique features from my system into his. This system will remain intact for the time being, as I do know there are several people that have used this system for a while now.

This system, designed to play Ironsworn: Starforged, features robust content generation utilities meant to increase your immersion while also getting you to the gameplay faster. The core system features approximately 260 tables and is designed to be easily expandable simply by dropping new tables into the designated folders. While this system is currently in its first release state, it is feature-rich and allows you to play Starforged to its full extent. This system is unofficial.

This work is based on Ironsworn: Starforged (found at www.ironswornrpg.com), created by Shawn Tomkin, and licensed for our use under the Creative Commons Attribution-NonCommercial-ShareAlike 4.0 International license (creativecommons.org/licenses/by-nc-sa/4.0/).

v0.8.3
- updated actorLink for token to be TRUE by default.
- Fixed the CONTINUE button on the Legacy tracks.
- Reverted data import to the included packs ONLY. Dataforged import is currently unavailable until rewrite of its import.


v0.8.2
- Removed the duplicated moves when in multiplayer.


v0.8.1
- Added support for Session moves.
- Swapped order of Threshold and Recover move categories to align with the Starforged rule book.
- Added ability to View/Edit in Completed (Challenges) tab so you can view and edit notes without having to first unflag it as completed.
v0.8.0
- Faction tables will now automatically populate
- Faction generator added to character dashboard
- Faction sheet now generated with appropriate data and buttons for "deep dive"
- Starship Type has fixed
- The Starship Type used to have the Class and Typical Role in one string, which the system parsed. The table no longer has the Typical Role, so this code has been commented out.
- Story Clue Macro added
- Fixed Progress Track in Challenges. Value was 10, but displaying empty progress track. Legacies now show as full when reaching 10. Clicking Progress will reset the Progress track and then advance Progress to 10.25. 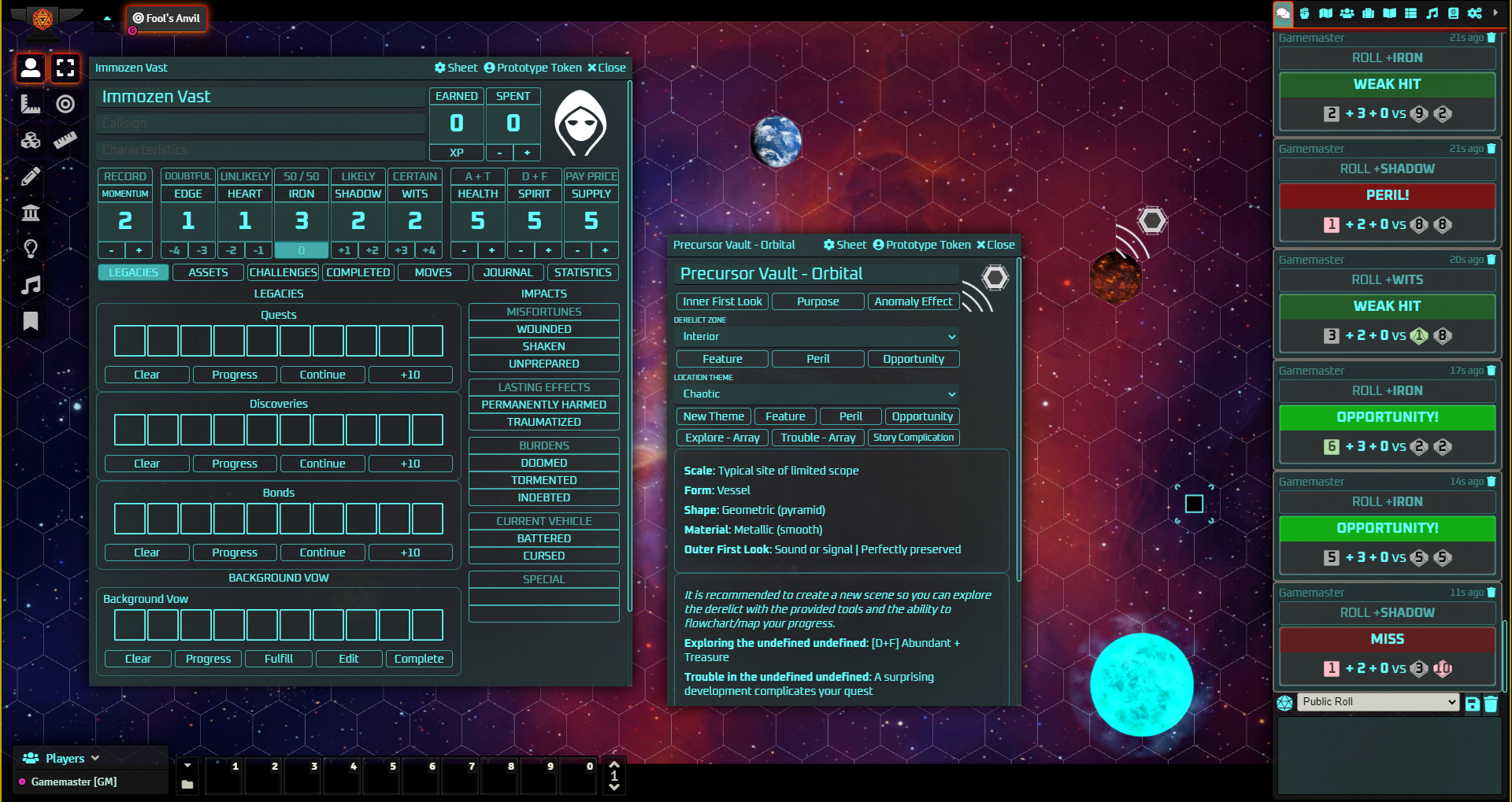