This module provides an opinionated alternative to how the roll workflow in DnD5e and how they're displayed.
Main goal is to minimize chat clutter, provide some flexibility in how much information is displayed to the players from the GM side, while also automating some basic tasks. To avoid having to care about all possible edge cases and houserules almost every automatic generated result is toggleable.

This is a replacement for the part of MESS that modified DnD 6es rolling! While it is not exactly the same, this is my new revision of it and MESS won't be maintained in this regard anymore!

Go to the GitHub's issue board and create an issue with the template fitting to what you want to post and follow its instructions.

I will ignore half-hearted bug reports ignoring the issue template or Discord mentions!
Its not difficult to put at least some effort into something that you want someone else to put their spare time into to fix!

Each item/spell usage having against targets (having an attack roll or saving throw) automatically creates target information on the chat card when rolled.

(Video tokens are currently not supported!)

Hovering over the Targets token picture or name highlights the token on the canvas. Double clicking the picture/name automatically pans the camera to the token (if its visible to the player) and selects it (if possible).

GM sees it all, players do not 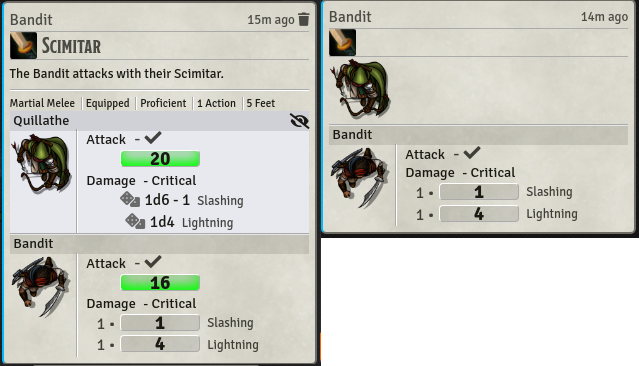 Mars automatically hides information about the the rolls, visible to the GM by the purple tint, similar to how FVTT shows whispered messages. If a target is hidden this way only the token art (and the name if visible) will be shown to the player. The GM can toggle this state by clicking on the eye icon, appearing when hovering the targets name.

Target names get automatically hidden from the players for tokens they do not know. This is determined by:

Other things that are hidden from GM created cards:

Attack rolls are automatically compared to the targets AC and decide whether they hit or not. This does not account for situational modifiers, like cover. For this reason you can toggle whether an attack hit or missed. (See below)

Additionally when a saving throw is rolled from a character sheet it will check if the last chat card expected this saving throw from the character. If yes it will automatically added inside the chat card instead of creating a new one.

For each damage type an automatic resistance check will be made and the appropriate multiplier will be applied.

Use Right-Click to toggle stuff

You can toggle (Dis-)Advantage when right clicking rollable objects like items, saving throws, ...
Alternatively you can also use CTRL + click for disadvantage and Shift or Alt + click for Advantage throws. (The chosen hotkeys are based on what people may be used to from MidiQoL and BetterRolls)

Hit/Miss and Success/Fail (GM only)

Toggle whether the attack roll hit or missed, as well as if the save was successfull or not!
This will also toggle associated damage fields. (For saving throws only when no hit roll is associated to the action)

Before you rolled damage you can toggle whether the dmg roll was a crit or not!

You can toggle through the resistance multiplier applied, when using the apply to target buttons.

Want to finally end the dispute of who tanks the most or deals the most damage?
Mars 5e tracks a few basic stats for your players!

The cards automatically use the global color settings defined in Whetstones! Hover a result to display a tooltip after a small delay, showing the details of the roll.
The players can only see tooltips from rolls made by players, not from GM rolls.

When hovering the damage label or to the left of the dmg rolls 1-2 buttons will appear. (One for regular damage, one for versatile)
Clicking on these will apply the respective damage amount to the target. If the roll has no target, it will apply the damage to all selected tokens.

The damage amounts will automatically get updated when the resistance multiplier is changed or a new damage roll was rolled.

Double clicking on a dice result allows the GM to modify the displayed result. Only numeric input is allowed!

Some barebones dice so nice support ist available. Its opinionated on few decisions and probably incomplete, since i neither know or use Dice so Nice. (So .. i probably forget stuff that its abel to do, and i'll not add everything)

(needs DnD 1.2.1+)
When using the automatically created spell templates the module will autotarget everyone in it.

Check the issue board for a list of stuff that may still come. Imo its kinda feature complete, but if i find something i still want to add or someone got a good suggestion i'll add it.

Special thanks to - @Nildran for providing the french translation

I'm doing this project mostly alone (with partial help of some wonderful people mentioned above) in my spare time and for free.
If you want to encourage me to keep doing this, i am happy about all kind of tokens of appreciation. (Like some nice words, recommending this project or contributions to the project).
What about donations? I do feel very honored that you think about giving me a donation! Instead I'd prefer if you send the cash to a good cause of your choosing!