A Foundry VTT module that aims to enhance the Drag Ruler module for use with the DnD5e system. This includes tokens being able to easily and quickly change between their different types of movement speed (swimming, flying, burrowing, and climbing) and an 'automatic' movement setting to streamline your encounter setups. You will no longer have to struggle with Wisps only showing their 0 feet walking speed, or with Dragons and their multitude of different movement speeds.

In addition this module fully supports the use of the Enhanced Terrain Layer + Terrain Ruler modules, actors and tokens can be configured to ignore certain types of terrain based on the movement speed they are currently using. Swimming in water terrain or climbing in mountain terrain is no longer a problem for your characters and creatures, even your Ranger can be configured to ignore movement penalties in their favored terrain.

A creature's movement speed can be picked by clicking a button in the Token HUD. By default this is set to automatic, which lets the module figure out what movement speed to use. There are also two keybindings (default [ and ]) to cycle through the movement modes of selected tokens. 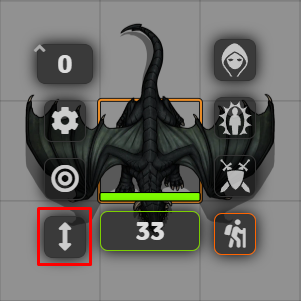 In the resource tab of the token configuration a token can be set to have access to bonus dashes, which when enabled will include an additional range band. This setting is enabled by default for creatures with features that permanently grant a bonus action dash, like Cunning Action.

A token can be configured to ignore certain or all terrain for a certain or any movement speed. This works for individual tokens but also for prototype tokens from actors and for the default token configuration in the core settings. By default swimming will ignore water terrain and burrowing/climbing will ignore mountain terrain. 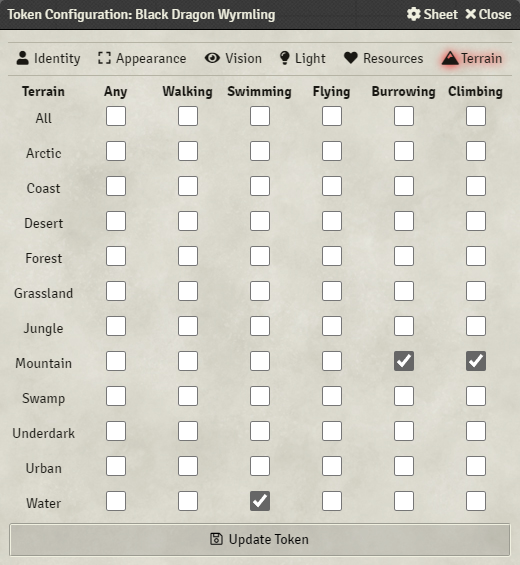 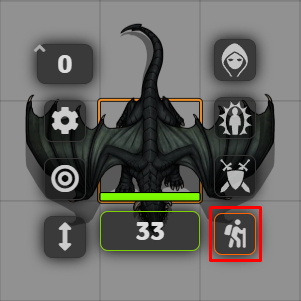 To help streamline the use of flying creatures, flying tokens will be treated as if they were 1 elevation higher for the purpose of ignoring difficult terrain. This eliminates the cumbersome manual changing of a token's elevation to make it ignore ground based difficult terrain before landing back on the ground. This behavior can be disabled in the settings.

A keybinding (default Q) can be held down to force a token to teleport regardless of its selected speed. Make sure to have the token selected before pressing the hotkey but do not yet start dragging it yet.

Various conditions in Dnd5e affect movement and this module handles all of them. Being either dead, grappled, incapacitated, paralysed, petrified, restrained, asleep, stunned, and/or unconscious will set a creature movement range to zero. Additionally, creatures that are hasted or slowed will have their movement speed doubled or halved respectively. Prone creatures will automatically crawl, spending extra movement.