Crossblade is an audio module that enables the GM to define playlist sounds that crossfade in and out between synchronous multi-layered sound files based on triggers. The result is an adaptive music soundtrack that responds dynamically to the game's state, such as the ebb and flow of a combat encounter.

What does this module do?

With Crossblade, you can setup playlist sounds that employ techniques sometimes used in video game soundtracks known as vertical re-orchestration or soundtrack switching. The basic idea is that the sound is composed of multiple layers of audio. Each layer is its own audio file, but each represents a different version or instrumental component of the same song. When a Crossblade-configured sound is playing, Crossblade will respond to events that happen in the game and automatically fade in or out each layer as configured. As layers fade in and out, the tone of the currently playing song changes, but the change happens "in place" without the song ending and is seamless compared to starting another sound entirely. 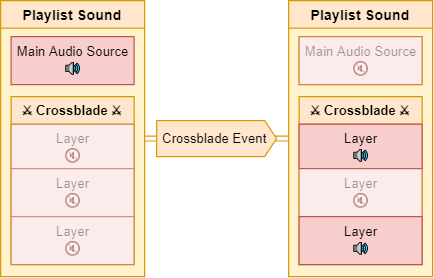 Crossblade does not come with any audio files. You will have to provide those yourself.

For instructions how to use Crossblade, check out the wiki.