Hunger automation for D&D5e. Tracks player meals, reminds them to eat, and applies Exaustion if they don't.

According to the SRD 5th Edition Starvation Rules, a character needs 1 pound of food per day or should suffer Exhaustion.

Burger Time automates hunger checks for players, reminding them via private message to eat. By default, it assumes players are using the SRD "Rations" item, and allows players to decide when to eat. 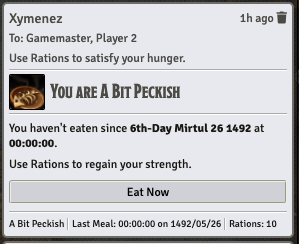 Keeping track of hunger is such a chore that most GMs (myself included) ignore it altogether, or treat it as part of a Long Rest routine.

For most types of campaigns, you should probably ignore hunger (like you would ignore encumberance); it takes players out of a fast-moving narrative and feels pedantic.

However, some kinds of campaigns really benefit from survival rules – particularly hex crawls, dungeon crawls, survival campaigns and anything where the players have a lot of agency. Keeping track of food, water, torches and other adventuring equipment is key to storytelling in these circumstances, and Burger Time allows you to do that with minimal GM effort.

Hunger is tracked at the Actor level, and all Tokens associated with the Actor share the same Hunger level.

Time between meals is only tracked for active players –– removing a token from the active scene stops the hunger timer, and hunger isn't tracked for logged-out players. Players will never starve because they missed a session or two.