Most game systems make use of situations that rely on characters taking turns, such as time-sensitive combat scenes in roleplaying games. Foundry Virtual Tabletop supports managing turn-based combat scenarios through its Combat Tracker sidebar. This article uses the word "initiative" in a general sense to represent the concept of a numeric ranking of turn order.

The Combat Tracker is accessed from the second icon in the sidebar, marked as a fist. Here, encounters and their listed combatants can be viewed and managed. Like all sidebars, the Combat Tracker can be popped out into its own draggable, resizable window by right-clicking its icon at the top of the sidebar.

As the Gamemaster, can follow these steps to quickly create and manage an encounter in FVTT.

A fight scene, race, or any particular set of people taking turns performing actions in-game can be considered an "Encounter." An encounter is tied to a specific Scene, which is the one currently being viewed when it is created. Players will only see the encounter in the Combat Tracker if they are currently viewing that scene. When first creating a world in Foundry, there will be no encounters created. An encounter can be easily created with the Create Encounter button found at the top left of the Combat Tracker.

Additionally, more than one encounter can be tracked. Even an individual scene can have multiple encounters being tracked at once. Individual encounters can be added, deleted, or activated with the buttons at the top of the Combat Tracker sidebar, allowing the Gamemaster to manage multiple fights or encounters happening at once on the same scene, with their own separate turn orders. Foundry's API refers to individual encounters as a "Combat" entity.

Encounters are made up by their participants. These participants, known in Foundry as "Combatants", are the actors that take turns with each other in the encounter. You can add a combatant to an encounter by right-clicking a token and clicking the "Toggle Combat State" button, marked by two swords and a shield. If an encounter doesn't exist on the scene, an encounter will be created for the combatant. At this point, a player who controls the combatant can roll for initiative by clicking the Roll Initiative die icon by the combatant in the Combat Tracker.

Foundry VTT allows the GM to edit combatants that have been entered into a combat tracker, to change the name which is displayed, their initiative position, and even whether their entries are visible to players in the tracker. 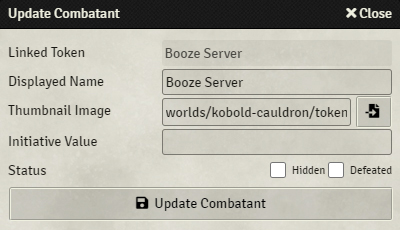 "Haunted Library" map and Tokens by ForgottenAdventures on Patreon.